Bakery Jatta has been through a lot since the Sport Bild article that questioned his identity. It was a heinous campaign to discredit an illustrious citizen from the Gambia.

It led to protests from teams playing against Hamburg whenever Jatta was on the lineup. Prominent among them are Karlsruhe, Bochum and Nuremberg. They launched an appeal to nullify the matches he played. END_OF_DOCUMENT_TOKEN_TO_BE_REPLACED

Later, he went on trials to Hamburg and as luck would have it, he passed. When he came of age, Jatta, became the first Gambian to play in the Bundesliga. His story is facing scrutiny after Sport Bild unearthed discrepancies. END_OF_DOCUMENT_TOKEN_TO_BE_REPLACED 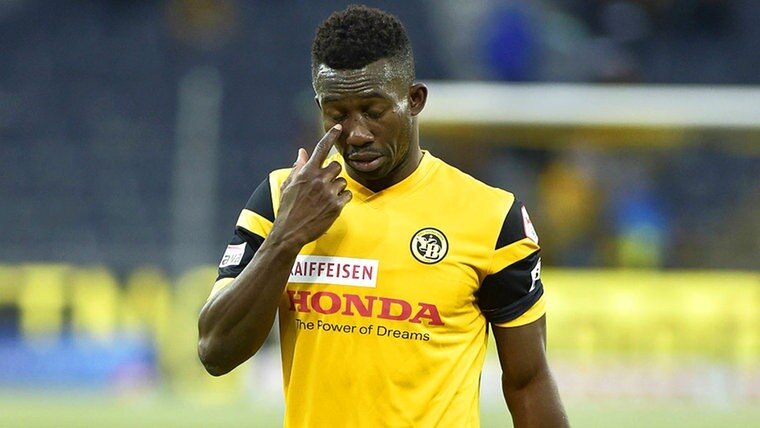 The winter transfer season in the Bundesliga came to an end yesterday. However, tongues are wagging in Hamburg and Bern on who is to blame for Sekou Sanogo’s failed move from Young boys Bern to Hamburg.Fact is, the deal failed because an Email from Bern arrived 240 seconds too late to beat the Monday deadline.

Sekou Sanogo, from Ivory Coast,,a midfield player for Young Boys Bern dreamed of playing in the Bundesliga. His dream almost came true yesterday. According to the chronology of events that lead to the collapse, it is very sad how 240 seconds can change the fortunes of a player.

Sanogo arrived Hamburg with his agents on Monday at 14:00 hours.He did the obligatory medical check up and an agreement was reached with Hamburg.Hamburg and Bern agreed on details an hour and half before the 18:00 o’clock deadline.The remaining process was just a formality. Unfortunately, the email with the concluded deal arrived at 18.04 from Bern.

Hamburg Sport director, Peter Knäbel, was quoted in the club’s web site with these comments,”unfortunately, the necessary documents for the deal came too late from Bern.It is very annoying.I am so sorry for the player, who would have loved to play for Hamburg.”

Young Boys, Sport boss,Fredy Bickel, refused to take the blame for the failed deal. According to his version, Knäbel came in contact with him on Sunday.Sanogo was the last minute option for Hamburg.Talks progressed until the next day. Sanogo went for the medical check up.Later, both parties agreed for a loan deal with a buy option for 2,2 Million Swiss Francs.At 17:51,Bern mailed the finished copy of the deal to Hamburg.The rest is history.

This is not the first time that Hamburg have failed to acquire a player at the last minute. Fax machine hinders Eric-Maxime Choupo-Moting transfer was the headline some time ago.

The Bundesliga has not started but Hamburg is already facing the heat. They have lost 4 test matches in 5 games, and the latest being the 0-4 loss to second division,Dynamo Dresden.

Hamburg is a team with tradition. One expects the club to have done their home work properly. It is no surprise that Günter Netzer is disappointed that the club has wasted time to improve the fortunes of the team.Netzer was the sports director from 1978 till 1986.Netzer wonders why the club failed to qualify for the European league. Adding, “it is not good because they have wonderful pre-requisites that was not there before. They have a big fan base and a wonderful stadium.” Ingredients he thinks are needed to build a team for the future in Hamburg.

Hamburg is still in the building process. The sports director, Oliver Kreuz and coach Thorsten Fink have told three defenders to look for another club. They are Michael Mancienne,Slobodan Rajkovic and Paul Scharner. It is part of a restructuring process to reduce costs.

Fink is planning to stabilize the defence with Johan Djourou,Heiko Westermann and Lasse Sobiech.

Last season, the defence was the weak point. Conceding a whooping 9 goals against Bayern Munich!

Hamburg need to get its act together for the coming season.

HSV sports director,Frank Arnesen, has confirmed in a statement that Eljero Elia will not be sold.”We do not want to release Eljero Elia and we are not in an emergency to sell him.”

Hamburg said Juventus Turin officially requested for his services on Tuesday. According to “Gazzetta dello Sport”, Juventus offered 8 million euros for the Hollander.

Elia who came from Twente Eschede in 2009 has not been impressive of late. I wonder what must have occurred for his dip in form.

Arnesen believes Elia is an important player for the team. I hope Elia can prove his worth often by scoring decisive goals or assists for the team soon.

The climax of a lackluster match between Hamburg SV(HSV) and Hannover 96 in Hamburg on Sunday that finished in a 0-0 draw, was Paolo Guerrero’s action off the pitch. He struck a spectator with a water bottle as he left the pitch.

It was alleged that Paolo was irked by the spectator who told him to go back to Peru. Incidentally, the spectator is a Hamburg fan.

Lately, Hamburg fans have been angry with the poor results of the team. Hamburg manager, Bruno Labbadia, and the players are under pressure to qualify for Europa league position in the league.

Paolo Guerrero could be trying to “express himself” amid tension between expectation and reality on the pitch. However, it does not justify his conduct.

He has apologized for his behaviour claiming, “I had a blackout,” he said on the club website. Also, “I was insulted and I over-reacted. “I am incredibly sorry. I hope that I get the opportunity to apologize personally to the spectator concerned.”

It is speculated that HSV fined him between 50,000-100,000 Euros. Guerrero, could comfortably pay the fine, but what happens to his reputation ?

The clash between the fan and Gurrero opens a new chapter in the annals of the Bundesliga. There has never been a precedent.

The German football association(DFB), and the state prosecutors are investigating the incident. We have not heard the last word yet.